(STAND STRONG, MISS WREN) is one of the most touching pieces relating to 9/11 that I have ever seen, told with the simplicity and earnestness of a grade school history lesson.

– Julie Sharbutt, Off Off Broadway Online

Monologues range from short audition pieces to performance pieces. On average, one page equals two to three minutes in performance. Many of the plays (short, one-act and full-length) contain good audition monologues.

#NO SUCH THING. Comedy. 1F/M (teen). 4.5 pages. A teenager with a guilty conscience imagines being punished by horrible, flesh-eating bacteria.

ALICE CHASE, NEW HAMPSHIRE YANKEE. Drama. 1F. 4 pages. Alice, 27, is an early American settler. One night in 1765, she is determined to take her young children and join her husband in the wilds of what will be New Hampshire. Based on a real person and events.

ALICE DEFENDS HER PASSION. Drama. 1F. 3.5 pages. 1895. Alice Austen, 29, insists that her passion is photography, not men, and she absolutely refuses to get married. Based on a real person. (From ALICE IN BLACK AND WHITE.)

BABYSITTING. Drama. 1F (young teen). 1 page. A frightening event that happens when she is babysitting signals a turning point in young Suki’s life.

BEFORE THE LIGHT CHANGES. Drama. 1F (teen). 1 page. 1885. Nothing in the world is as important to young Alice Austen as photography. Nothing. Based on a real person. (Adapted from ALICE IN BLACK AND WHITE.)

CHIEF. Comedy with drama. 1M. 3 pages. A Golden Retriever recounts his life with Girl of Devotion, his beloved young owner.

CREATION. Drama with comedy. 1M (middle-aged). 1 page. In 1910, sculptor Edward Clarke Potter almost has a meltdown deciding what to make for a commission. Based on a real person. (Adapted from O RUMBLES OF JOY!)

THE DANGERS OF WONDER WOMAN. Comedy. 1F. 1 page. In 1953, a mother warns her young daughter about the busty comic-book heroine. 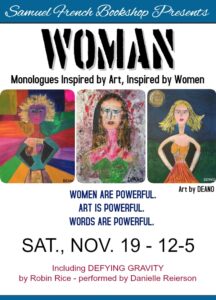 DEFYING GRAVITY. Comedy. 1F. 5-7 min. A 65-year-old woman who has been an exercise addict all her life discovers that despite her efforts her body has aged – specifically, her breasts are “not up where they’re supposed to be!” (Adapted from full-length plays THE BREAST MONOLOGUES and MARGIE DITCHES THE EXPANDABLE PIG.)

THE ELEPHANT IN THE ROOM. Drama. 1F. ¾ page. A woman composes a breakup letter to her girlfriend/lover.

EDNA MAE UNPACKS HER LIFE. Drama. 1F (middle-aged). 4 min. Edna Mae put aside making art years ago to tend to wifely and motherly duties in her conservative midwestern town. But now her youngest child has moved out. She brings her painting supplies out of the attic and sets up a studio – keeping it all a secret from her husband. When he discovers what she’s been up to he destroys her creations. In a rare moment of rebellion Edna Mae accepts a trip to San Diego from a friend. She may never return. (Adapted from EVERYDAY EDNA MAE.)

EVERGLADES LOVE. Drama. 1F (elderly). ¾ page. Marjory Stoneman Douglas pledges that she will fight to her last breath to save the Florida Everglades from extinction. Based on a real person. (Adapted from NECESSARY GEOGRAPHY.)

FALLING TO HOME. Drama. 1M/F. (5 pages) A person feels so different from all others (much smarter) that they have come to the end of their rope. They jump off a cliff. In the liminal space, life flashes before their eyes. The landing is a lot softer than expected.

HOME. Drama. 1F. 2 pages. A woman was told as a child that she had no musical talent. She left her hometown, dragging this criticism with her through life. Now she is in the afterlife, but can’t find a place to rest. She rediscovers her home and all the music the rural town and landscape hold. (Written to be performed inside a box for Headspace Theatre, but stage directions may be changed.)

HONEY DIGS IN HER HEELS. Drama. 1F (12). 1 page. Young Honey refuses to move to New York. She is determined to stay on the island of Tortola, her beloved home. (From HONEY’S SMILE.)

I WANT ME A PENGUIN. Comedy. 1F. (1 page) A nun has been cast out of a convent for misbehavior. She is lost in a landscape of snow. Suddenly, a very large, testosterone-dripping male penguin appears and despite trying, she gives up the cloistered life for this magnificent bird. (Adapted from one-act THE STRAIGHT AND NARROW.)

LEFTOVERS. Comedy. 1F. 1 page. Early 1950s. A woman with low self-esteem yearns to be a contestant on tv’s “Queen for a Day.” (Adapted from QUEEN FOR A DAY.)

LILYBELLE. Drama. 1F. 6 pages. A practical mother has a terrible time deciding what to do with her young daughter’s very sick cat. (Adapted from LISTEN! THE RIVER.)

LIQUID LUNCH IN HELL’S KITCHEN. Drama. 1F/M (teen). 1 page. Kendall is in a dark bar in New York City at noon. Not a good thing!

THE LONG SHADOW. Drama. 1F (elderly). ½ page. A Holocaust surviver calls on the youth of today to help rid the earth of evil that still lives.

MARCHING ON HIGH. Comedy/drama. 1M (teen). 2.25 pages. Perfectionist Luce’s passion is marching with his high school flag squad. He drops a flag in a parade, and he’s highly visible since he’s the only male on the squad. Very not good. (Adapted from PLAY NICE!)

MARGARET MEADE FOR THE WIN. Drama. 1F. 6 pages. A woman gives her granddaughter courage by reliving a personal traumatic event in the 1960s. 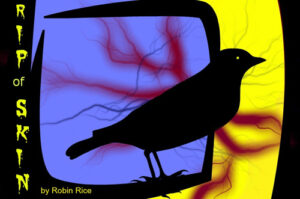 RIP OF SKIN. Drama. 1M/F. 8 pages in blank verse. A crow is revealed to be Death. Not for the faint of heart. (Adapted from A WOLF, A RABBIT AND A CROW WALK INTO TOMORROW.)

ROOTS. Drama. 1F (elderly). ¾ page. As a girl, Ruth and her family escaped from Nazi Germany. New York City has been her home since then, but now she is being squeezed out of her tiny apartment by spiraling rent.

SAM HIRSHBAUM – TYMPANI. Comedy. 1M (young teen). 1 page. Sam has a fit of anxiety while waiting for an audition. (Adapted from HARMONY’S AUDITION.)

STAND STRONG, MISS WREN. Drama. 1F. 3.5 pages. Peter Stuyvesant steps from history to give courage to a New York City elementary school teacher who witnessed the 9/11 tragedy with her students.

THAT IS THAT. Drama. 1F (young teen). ¾ page. Someone accuses young Suki of a petty crime. Her mother thinks she did it. Or does she? Communication fail.

UNEVOLVED. Drama. 1M/F. 1 page. Zephyr, an unearthly creature of indeterminate age and sex, must keep track of births and deaths on Earth. Fine, as long as a trip to Earth isn’t necessary! (Adapted from early version of HARMONY’S AUDITION.)

WALLY’S DAD. Drama. 1M (teen-early 20s, African-American). 1 page. Wally had an altercation with the police. He is unbowed.

WILL YOU DANCE ON? Drama. 1F (elderly). 2 pages. Marjory Stoneman Douglas pleads with people to recognize how the Everglades is being devastated and to do something about it. Based on a real person. (Adapted from NECESSARY GEOGRAPHY.)

THE WOLF’S RESOLVE. Drama. 1M/F. 2 pages. A wolf searches desperately for a human who can solve the environmental crisis. (Adapted from FRONTIER and MIDNIGHT SUN.) Published in “Audition Monologues for Young Men,” Meriwether Publishing.

Instantly engaging and deeply provocative, this memorable monologue (THE WOLF’S RESOLVE) stuns with the power of haunting simplicity. This evocative piece is both a social satire and a compelling character portrait.