In this highly theatrical fable, a messianic Wolf has a plan for saving mankind from extinction.

As a child, Aurora experiences the Exxon/Valdez oil spill in her native Alaska and feels she is at least partly responsible. She forsakes her desire to be an artist and travels the continent, trying to save the planet from continued devastation at the hands of humans. She puts aside her personal desires and future. Eventually, the task overwhelms her. Things are getting worse, not better. Wolf was her childhood imaginary friend, but she now blocks him out. He tries to fight his way back into her consciousness because his plan needs her. 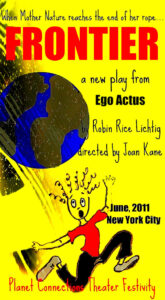 In Florida, Adam falls for Aurora. His addiction to tv and Jerry Lewis impressions seem charming. Feeling she was an ineffectual activist, Aurora redirects herself to trying to be a perfect wife, still not following her own heart’s desire. Adam and Aurora marry and move to Valdez where Wolf cautions Aurora that Mother Nature is fed up with being treated poorly. “One more assault on the planet,” he warns, “One more insult and Nature will snap.”

Crazy to have a baby, Adam impregnates Aurora. She absolutely doesn’t want to bring a child into this overcrowded, polluted world and heads off to get an abortion. Wolf intervenes. He wants the baby. He plans to raise select babies so they have respect for the land. These children will live in harmony with the Earth. They will survive when Mother Nature lowers the boom. “You have a chance to make a greater difference than you ever dreamed,” he tells Aurora.

Signs indicate that a catastrophe is about to happen. Pregnant Aurora chooses to warn Adam instead of escaping with Wolf. Drilling starts in the Alaska Wildlife Refuge. Mother Nature strikes back with a world-wide avalanche.

A thousand years pass. Coming unfrozen, Adam and Aurora discover that the world is wiped clean of human life — only animals survive. Adam is content in their buried bedroom as long as the animals take care of them and the tv works. Aurora gives birth to twins (a boy and girl). In the end, Aurora gives the babies to Wolf, choosing a new frontier for mankind. But she refuses to go with him and turns her back on Adam, choosing instead to embrace herself and her painting.

SET REQUIREMENTS: Except for set pieces, the play may be performed on a bare stage. Lights and sound are important.

HONORS: Two nominations and one win for a reading in Planet Connections Theatre Festivity, NYC.

SCRIPT EXCERPTS AND AVAILABLE AT:
newplayexchange.org