AND THEN THE ELEMENTS SPOKE. Drama. 1M; 1F; 1M/F. (10 min.) A young African calls on environmental elements to protect the Kalahari Desert from an American prospector looking for oil.

BEFORE YESTERDAY WAS BETTER. Drama. 1F; 1M. (10-15 min.) In a state with liberal gun-regulation laws (Vermont), a man and his granddaughter must make a moral decision. Should they protect each other and a friend who committed murder, or should they follow the law?

BETWEEN DOLLYWOOD AND DISNEY. Comedy/drama. 1F; 1M. (10 -12 min.) The longtime marriage of an elderly couple is strengthened when they face growing memory problems together.

BREAKING NEWS! Comedy. 1M; 1F; 1M/F. (10-15 min.) An aging pigeon reporter watches with bated breath as a dramatic story unfolds: Lady mouse sneaks into an apartment to grab a slice of pizza for her family. The cat who lives there, bored out of his skull, wants her to stay and play. Their bargaining becomes political. Finally she proposes a plan to provide him with entertainment and her with pizza. Together they’ll upstage Pizza Rat, the YouTube sensation.

BRIDAL WREATH. Comedy/drama. 1F Caucasian; 1M African-American. (10 min.) An interracial couple is due to get married in an hour, but her fears intervene.

BRONCO BUSTER. Comedy. 2M; 1F. (10-12 min.) 1885 – The Arizona Territory. Sculptor Frederic Remington sends hung-over cowboy Gabby to find a horse for a model. Gabby offers his own old horse, Betty. Remington is aghast. Gabby doesn’t live up to his prettified vision of the Old West and neither does Betty. (“I fell out of my chair laughing.” “Smart, funny, fantastic language, distinct characters – all with dramatic arcs, historic and yet contemporary – not to mention I learned a bit of art history.”– audience members at NJ Rep.)

BURYING ELEPHANTS. Drama. 2F. (15 min.) Two women have been having an affair unbeknownst to one woman’s husband. She is pregnant — the very big elephant in the room. What will get buried?

DAY 34: DANCE LIKE THERE’S NO TOMORROW. Drama. 1F;1M;1M/F. (5 min.) On Day 34 of quarantine, the curtain between imagination and reality disappears.

DÉJÀ VU ALL OVER AGAIN. Comedy. 1F; 1M. (10 min.) The Oracle of the Yankees tries to find the answer to Yogi Berra’s slump.

A DIFFERENT DAY. Drama. 2F; 1M/F. (under 10 min.) A lyrical play without words. On a small planet, a young person’s daily ritual is watering a plant. They bring each other joy. When a sprout appears by the plant, the young person’s world is turned upside down. Room for music, sound and light effects. 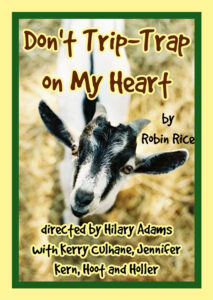 DON’T TRIP-TRAP ON MY LONELY HEART. Comedy. 1F; 1M/F. (10 min.) A lonely goatherder and a troll fall in love despite goats.

EDNA MAE AND SALLY SERIOUSLY CONTEMPLATE SAN DIEGO. Comedy. 2F. (10 min.) Two middle-aged Midwestern ladies have ventured from their sheltered lives for a trip to California. Their eyes have been opened to the world, and they don’t want to go home. But … (Developed into full-length EVERYDAY EDNA MAE.)

GLOOM, DOOM, AND SOUL-CRUSHING MISERY. Comedy. 1M; 1F; 1M/F. (10 min.) A depressed Russian couple yearns to be even more depressed, but a cheery travel agent offers to make their dreams come true. The play is in 2008: The Best Ten-Minute Plays 3 or More Actors.

HAPPIWY EVER AFTER. Comedy. 2M. (10 min.) In a far-away kingdom a sleeping beauty with a speech impediment has been waiting for his handsome prince for eons. The prince, who has speech problems of his own, finally arrives, but is unwilling to commit. Will this fractured tale end with happiwy ever after? Wacky, gay version of PURITY AND THE PRINCE. (See below.)

HAPPY THANKSGIVING, TURKEYS! Comedy. 2M/F;1M. (10-15 min.) In a future world, turkeys rule and humans are the farmed animal. On Thanksgiving, Turkey Lurkey wants Human on the dinner table. Humans fight for their lives!

IT’S ALL IN THE BREAST. Comedy. 2M. (1 min.) Two male turkeys hang out on the corner watching all the girl turkeys go by. View Screaming Media Production.

JUST ANOTHER GEORGIA MORNING. Absurdist/poetic. 2F; 1M. (10 min.) A cow gives birth and the bull loves the calf, but it takes an angst-ridden French frog to bring happiness to the meadow.

LUST & LIES. Drama. 1M; 1F. (10 min.) Following a crime that really happened in 1831 in rural Pennsylvania, the wife of a murdered man and her lover are on trial. In a dramatic, rapid-fire recounting of their relationship and the tragedy, the two go head-to-head. (Excerpted from full-length drama LUST & LIES.)

MENAGERIE. A collection of nine short plays about animals. Each play has at least one animal character. May be performed as a complete evening. There are a few extra plays so you can pick and choose if you don’t want to perform all of the plays in the collection.

THE NEST. Comedy/drama. 3F. (15 min.) Mary Tyler Moore, a stage manager and Paula Zahn do battle over a hawk nest. Based on true events.

NOT STILL LIFE. Drama. 2F. (10 min.) Painter Vanessa Bell and her sister novelist Virginia Woolf try to work in the same room, but their ideas are so big the space can’t contain both of them. Inspired by the painting Still Life by Vanessa Bell.

THE OTHER SHOE. Comedy/drama. 1M; 1F. (8-10 min.) Macabre, funny and somehow also poetic look at getting rid of a body and the unpleasant memories that surround it.

PROBABILITY. Comedy. 2M/F. (10 min.) In the future civilization is evolving backwards. The humans in the play are turning into apes, though one of them refuses to see what is happening.

RELIANCE. Drama. 1F; 1M. (~9 min.) A young religious woman and an elderly atheist man are shipwrecked on a tiny island. The tide is coming in.

SAVE THE TURKEY! 2F; 2M. (10 min.) Political wackiness ensues when Farmer Brown, who bears a strong resemblance to a certain Republican President, wants young Tom Turkey to serve – or rather, wants to serve Tom for Thanksgiving. Tom’s mom and Martha Stewart take sides. It all turns out fine for the turkeys.

SECRETS ON A CHINESE BED. Comedy. 1M; 1F. (10 min.) A Russian couple is visiting China. To be truly Russian, they feel, they must be miserable and unfortunately everything in the Chinese hotel is very pleasant.

SEDUCING RAMONA. Comedy. 1M; 1F. (10-15 min.) A playwriting cavewoman prepares to send a script to a producer, but her husband wants her to cook the animal he just dragged home for supper. (You had the audience captivated right through to the very end. – Tracy Eccleston, director, She Speaks, Kitchener, Canada.)

SNUG HARBOR. Drama. 2F. (10 min.) A teenager, newly jobless and on the spectrum, is at risk of homelessness. A young girl from an earlier time meets her on the Staten Island ferry. Past and present collide.

THE STRAIGHT AND NARROW. Absurdist. 2F; 1M/F. (10 min.) Lots of laughs but philosophical subtext. Two nuns are banished to an icy nowhere place, traveling on a single ski (with a personality of its own). They want to be redeemed, but a suspicious penguin appears and all hell breaks loose.

Funny, edgy, wild and sweet! From the first moment to the final icicle battle, you had me!

TAKE A BITE OUT OF LIFE! Comedy. 2F; 1M. (10 min.) Middle-aged sisters and a charming Scottish crew member one evening on an ill-fated cruise ship in 1912.

TASTE THE BABA. Comedy. 2F. (1 min.) Better to live fully or cautiously? The end may be around the next bend. You never know.

TEA SHOULD BE HOT. Comedy/drama. 2F. (10 min.) A Jewish woman is unhappy that her son is marrying a Christian woman. Will she loosen her grip and open her arms?

TOMORROW’S SOUP. Comedy. 4F. (10-15 min.) Serious spoof on a reality cooking show. Three witches brew up soups that will forecast the future for the world. Inspired by the painting Starry Starry Night.

TUGBOAT LOVE. Comedy. 1F; 2M. (15 min.) No depth of plot or subtle subtext in this one. Written to be performed in a swimming pool (works on dry land too). Li’l Toot, is in love with the Statue of Liberty, but is so tongue-tied he can barely “toot.” His lady love – fed up with immigration quotas , wants to return to France. Gull wants to go too to experience French cuisine. Will Toot get up his nerve to speak? Will he tow the Lady to France? Will Gull ever get a healthy meal? Will the Lady and Toot find true love? See one-act SPLASH! for a longer version. (“A scream!” – audience member, Texas.) For a preview or to purchase, go to Brooklyn Publishers.

TURN ME ON, BABUSHKA. Comedy. 1M; 1F. (10 min.) A newly-married couple love each other, but can’t figure out how to turn on passion and desire. Secret fetishes are revealed and all will be well. 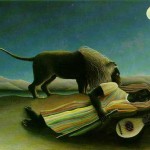 WOODY AND THE LION KING. Comedy. 2M. (10 min.) Woody Allen is running to escape Mia Farrow’s wrath across the border into Mexico, but his way is blocked by a lion fleeing into the U.S. The lion wants to go on Broadway in THE LION KING. Eventually, the two strike a deal but not before Mia almost discovers Woody. Inspired by the painting The Sleeping Gypsy.

YOLO. Comedy. 1M; 2F. (10 min.) Unit set but good for an outside performance too. A sort-of dashing prince in a faraway kingdom that is sort-of Russia must find a bride. In an airport he meets Lucy Lou, a flexible gymnast with an unfortunately squeaky voice and Alice, a disgusting troll with a gorgeous singing voice. The women crave his palace, but… Don’t look for a serious moral.

…Robin Rice is a fine writer in the 10-minute play form.